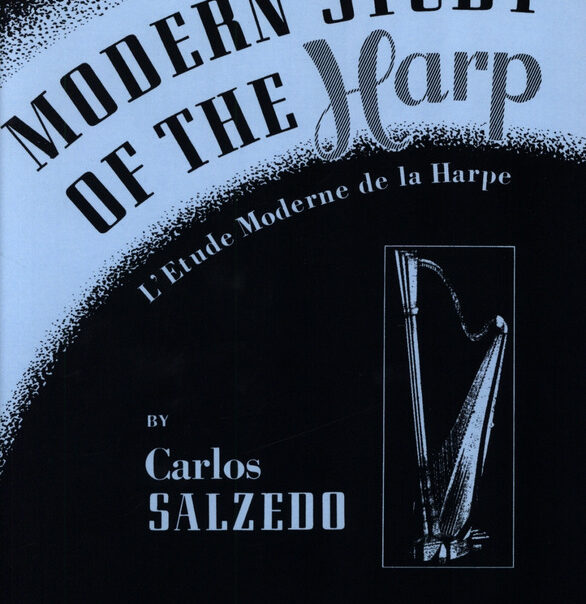 In my previous blog I talked about Salzedo’s work, i.e. his collaboration with Ravel. I only wrote a brief paragraph whilst I feel that he deserves to be highlighted some more.

His arrangements aside, he also wrote numerous original compositions for harp. As a harpist and devoted teacher he provided his pupils(and also himself for his recitals) with the repertoire they needed by writing pieces with specific technical difficulties to train their skills.

His ‘Modern study of the harp’ is invaluable! The five studies he included offer a wealth of technical material. They are written in quite a modernistic way and offer much more than playing difficult notes as an exercise.

His extraordinary harp playing combined with great musicianship made his view on this instrument very innovative and that was exactly what composers were looking for.

In all of Salzedo’s work, we find very detailed markings like in Debussy’s music f.e. Markings that he thought of in depth and are crucial for his convinced mind about organization. He believed that the intention of the composer can only be brought to expression by meticulously following his instructions and not adding one’s own free interpretation. It may sound as a very conservative and strict interpretation but it was certainly supported by his friendships with the greatest composers of his generation.

I believe that his more theoretical approach of the harp, contributed to bringing the harp into the world of ‘serious’ music. It needed to break free from being the instrument of rich aristocratic daughters, but also from being the odd one out in the orchestra.

His influence on fellow composers and colleagues shouldn’t be underestimated. His opinionated view on harp playing was soon noticed by other virtuosi in the world of music making.

None other than Toscanini invited him to the harp chair of the Metropolitan opera in New York. Strawinsky called him one of the greatest side-readers on piano he had ever met! (yes he also had the privilege to be talented on this instrument)

He developed and passed on a technique which brought the harp into the 20th century and succeeded in expanding the notation of harp sounds and colour. Not only a harpist, but very much a musician he founded (during his time in NY) the International Composers guild, together with Varese. This was extremely successful and promoted (newly written) work of composers like Bartok, Stravinsky, Ravel, Hindemith, Ives,…

He devoted his life to performing and teaching and was co-founder of the Curtis institute of Philadelphia, where the harp department still benefits of his founder’s legacy.